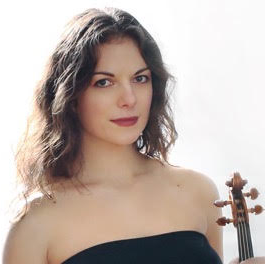 Liana was introduced to the violin by her grandmother, a violinist of a “Mosfilm” orchestra, at the age of four. Her first debut as a soloist with an orchestra was at the age of nine. At the age of six, Liana appeared on Moscow television as a rising star and has since performed concertos with orchestras and recitals with her mother, a collaborative pianist at the Moscow State Conservatory, in many prestigious venues throughout Russia including the Great Hall and the Tchaikovsky Hall in Moscow, and the Philharmonic Hall in Saint-Petersburg.

As a laureate of the prestigious New Names foundation in Moscow and a fellow of the Spivakov foundation, she performed in the Vatican for Pope Jean Paul II, released a CD with the Melodia label for the performances at the 1996 Olympic Games in Atlanta and was invited as a young my talent to The International Colmar Festival. Liana Gourdjia became a laureate of the Tchaikovsky International Competition for Young Artists in Sendai in Japan at the age of fourteen and subsequently appeared numerous times on television and radio programs dedicated to presenting young stars in Russia and Europe.

As an active chamber musician, Ms. Gourdjia has collaborated with such artists as Jaime Laredo, Lawrence Power, Vladimir Mendelssohn, Marc Coppey, David Soyer, Antonio Meneses, Giovanni Belucci, François-Frederic Guy, Alexander Melnikov, Peter Laul, and members of Talich, Vogler, Juilliard, Guarneri and Tokyo String Quartets among many other musicians. Liana is a founding member of the Gourdjia- Coppey- Laul piano trio. The trio has been invited the perform in many prestigious venues including the Théâtre de la Ville in Paris, Concertgebouw in Amsterdam, the West Cork festival, to name but a few. Liana has performed at festivals including the Printemps des Arts in Monte Carlo, Musique de Chambre de Lyon, the 92/Y in New York, Les Musicales de Compesieres in Geneva, Les Musicales de Colmar, and is a laureate of Juventus festival in France. She was awarded a three year fellowship at The Marlboro Music festival, where she had a chance to collaborate with Mitsuko Uchida, Leon Fleisher, Km Kashkashian…

A proponent of contemporary music, she has frequently premiered works, commissioned by her from prominent and upcoming composers. She is a member of the Paris based Ensemble Variances under direction of Thierry Pécou and served as a concertmaster of the New Music Ensemble at Indiana University under direction of David Dzubay.

Liana began her studies at the famous Central Music School at the Moscow State Conservatory with renowned professors Iryna Bochkova and Maya Glezarova. Upon graduating, she moved to the U.S. to continue her studies with David and Linda Cerone at the Cleveland Institute of Music, where she received Bachelor and Master of Music degrees. Liana received an Artist Diploma from the Jacob’s School of Music at Indiana University, Bloomington, studying with Jaime Laredo. At The Indiana University she was the first recipient of the prestigious Jacob’s scholarship, and was subsequently awarded the Performance Certificate in recognition for outstanding performances at her degree recitals. Liana benefited from master classes with Menahem Pressler, Janos Starker, Gil Shaham, Alex Kerr, Pamela Frank, Arnold Steinhardt, Gabor Takacs and the Orion String Quartet. An avid reader, she is fluent in Russian, French and English. Liana now lives in Paris, pursuing a career as a soloist.