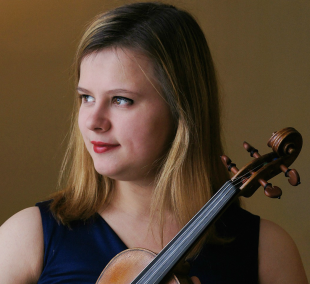 Violinist Magdalena Geka (1992, Latvia) is one of the most promising young musicians emerging from her country. She was nominated for Grand Music Prize of Latvia as “The Young Artist of the Year” 2014. Her most recent success include playing Bruch violin concerto with the Hamburger Symphoniker in September 2014 and her highly acclaimed debut with the Latvian National Symphony Orchestra in October 2014 also with Bruch, replacing the soloist on a short notice.

She appears regularly with various orchestras in Latvia, France, Germany and Ukraine (Concertos of Britten, Tchaikowsky, Schumann, Brahms…) and has performed in most countries in Europe as well as in Israel.

Magdalena started her violin studies at the central music school in Riga with Skaidrite Rakovska before moving to Paris at age 16 to study with Larissa Kolos in the Paris Regional Conservatory from where she graduated with a Concert Artist diploma in 2012. She is currently finishing her Bachelor degree at Conservatoire National Superieur de la Musique de Paris in the class of Svetlin Roussev, Ayako Tanaka and Florin Szigeti. She has also studied regularly with such teachers as Wolfgang Marschner, Amaury Coeytaux and Kathrin ten Hagen.

A passionate chamber musician, she is currently playing in Senna Quartet and has had the possibility to perform with such musicians as Konstantin Bogino, Laura Mikkola, Amaury Coeyteaux to name a few. In summer 2014 she launched a chamber music festival in her native town, Saulkrasti, reuniting young talented latvian musicians studying abroad. They toured extensively in Latvia in February and March 2015 and recorded Shostakovich Piano Quintet for the Latvian Radio. She is also working regularly with many composers and has up to date performed around 20 world premieres. Since February 2014 she plays regularly with the highly acclaimed chamber orchestra Kremerata Baltica, and since 2012 has been member of Orchestre de Chambre Nouvelle Europe. In the academic year 2014/2015 she is a trainee at the Orchestre Philharmonique Radio France.